After a two year hiatus from university, I’ll be going back to school to finish up my biochemistry degree in the fall! Of the Texas Core Curriculum, I have two classes remaining – one of them being my Creative Arts credit. Because of that, I decided to take a theatre appreciation course (mainly so I could have an excuse to watch another musical), and I had the pleasure of watching Aladdin! Below is the play critique that I wrote for the class, with some pictures added in. 🙂

Well Ali Baba had them forty thieves, Scheherezad-ie had a thousand tales… But when I saw Aladdin in Dallas – geeze! I experienced all the magical details! On Saturday, June 22, 2019, I got to experience the Genie’s magic firsthand at the Music Hall at Fair Park, thanks to the Dallas Summer Musicals. Disney’s Aladdin, the Hit Broadway Musical directed by Casey Nicholaw, was based on the book and lyrics written by Chad Beguelin. It was surreal to see one of my favourite movies come to life before my eyes!

Since I was a child, I would watch musicals and Disney movies with my mom and I never thought I would have the chance to do both at the same time! The lights, the costumes, the set design… all of it highlighted the astounding performance put on by the cast. The main message was universal and really hit home for me – no matter your socioeconomic background, if you have a heart of gold, then you can be “the diamond in the rough”, so to speak. The secondary message opposed the idea of arranged marriages and women in subservient roles. Jasmine showed that women could be independent, speak their minds, and that they shouldn’t settle for any man who sees them as less. We followed our protagonist — the riff-raff, street-rat Aladdin, as he sought out his princess, the outspoken, independent Jasmine, thinking that he could win her love with wealth and splendour. Over the course of the play, (with the help of the Genie, provocation from Jafar, and encouragement from Jasmine) our “diamond in the rough” realised that he had the wealth of character that Jasmine really wanted all along, and finally revealed his true identity, winning her heart and hand as her equal in marriage. Such a wholesome message, performed in all of the splendour that it deserves.

My first impression of this musical, before the first lines were even spoken, came from the set design and props. Aladdin is set in no distinct time period in Agrabah, a city of mystery and enchantment somewhere in the Arabian Peninsula (as we infer from the song Arabian Nights). Our setting seems to be loosely based on the city of Agra, India, with the Sultan’s palace resembling the Taj Mahal and the city resembling the street markets. This was reflected in the stylised, yet realistic interpretation of the fictional city, with representational silhouettes of muted buildings in the background, Aladdin’s humble rooftop home, and the Sultan’s grand palace. When Aladdin showed Jasmine his rooftop home, he was ashamed of it how small and impecunious it was, as his home revealed that he was actually a poor street beggar and thief. On the other hand, Jasmine’s home resembled the Taj Mahal. The palace was seen a backdrop that showed merely its outline, revealing the wealth and grandeur that Jasmine was accustomed to. The realistic aspects of the setting were contrasted by the stylised details of the set design, like the brightly coloured backdrops, the cartoonish movable props, and of course the Cave of Wonders, dripping in gold. Of course, Aladdin wouldn’t be Aladdin without the Genie’s lamp and the magic carpet. The lamp was honestly understated, just a small golden lamp, brought to life by smoke and lights, revealing that the Genie, though he has great powers, comes from a modest background. The magic carpet, on the other hand, didn’t have as much personality as it did in the movie, but it captivated the audience for a scene, soaring through the air as Aladdin attempted to win princess Jasmine’s heart. Overall, I would say that the set design and props were successful in adding context without taking attention away from the story.

As in every Disney production, the costumes and makeup helped the viewer discern good and evil, identify shifts in character, and understand the role of different characters. Overall, the costumes and makeup represented the people of Agrabah in a stylised manner, with a more glamorous take on the clothing of commoners, a very bold choice in outfits for the royalty, and very clear interpretations of characters from the movie. First off, Iago wasn’t in costume as a bird, but as Jafar’s human assistant. His costume had the same colours and rounded figure of the beloved scarlet macaw that we know and love, revealing him as the less intimidating comic relief, contrasted with Jafar’s dark, menacing figure. The Genie’s blue garments showed another stylised interpretation of Robin Williams’ character in the original movie, which really worked well on the stage. His baggy trousers, called a sirwal, gave him the same flowy figure, accentuating the lively movements and personality from Major Attaway’s performance as the Genie. The makeup, however, was rather difficult to see from afar. The only person whose makeup I saw was the makeup on one of Aladdin’s buddies Babkak, who I saw after the play. He had thick eyeliner, which is consistent with the male movie stars of India. This detail is relevant to me because the city of Agrabah seems to be loosely based on the city of Agra, India, so small details like that helped maintain the cultural consistency that kept me immersed in the world of Aladdin.

The component that really tied this performance together was the use of lights and sound. Warm coloured lighting set the stage, showing the heat of the so-called Arabian days, which more often than not, are hotter than hot in a lot of good ways. Besides telling us the time of day, this warm lighting on the very sparse set showed us the conditions that the people of Agrabah had to endure – the heat and desolation of this faraway place. Later in the play, both lighting and sound worked together to bring the Cave of Wonders to life when Aladdin touched a jade necklace, causing an eruption of thunder, a flashing of lights, and a closing of the cave’s exit. The crackle and the flash really contributed to the mood, striking fear in the audience as our protagonist realised the gravity of his mistake. Moments after that, Aladdin rubbed the magic lamp, smoke (as shown by lights against the backdrop) snaked its way out of the lamp, and the Genie popped out! This lighting effect really contributed to the magic and build-up to the Genie’s reveal, making the audience sit on the edge of our seats in suspense.

However, all of these components would fall flat without a stellar cast and all-star directing. The cast made a lasting impression both during and after the show. After the show, the major cast members came out to meet all of the mega-fans – mainly children, sign their playbills, and take pictures with them! I snagged a picture with Major Attaway, who played the Genie and was performing here in his hometown of Dallas. I saw how gracious the various cast members were, ensuring that every child got a signature and picture if they wanted one. It was so touching to see little girls dressed up in little Jasmine costumes, squealing with excitement when they met Kaenaonālani Kekoa, who did a beautiful rendition of Jasmine. During the show, the characters came to life and the audience members empathised with our hopeless romantic of a protagonist, the unfailingly loyal Genie, the always displeased Jafar, and honestly every single cast member. I felt completely immersed in their world, and I think it boiled down to the actors’ raw talent. It seemed that every member of the cast had both qualities of a good actor – a magnificently expressive voice and a splendidly supple body. It seemed they were all able to imagine themselves in the situations that their characters were in, and react as if they were in that situation, themselves. For example, it seemed that the cast members playing Aladdin’s friends were really invested in his life; they were upset when he dismissed them, yet earnest in their desire to help him when he was later in trouble. The way they interacted, sang, and danced showcased their talent and demonstrated how invested they were in playing their part. On the other hand, Casey Nicholaw’s stylised directing shone through in every choice he made for this performance. All aspects – the grandeur of set design, usage and placement of props, style and design of costumes and makeup, and brilliant utilisation of lights and sound, not to mention his brilliant casting – made this a stand-out performance. A small detail that I really appreciated was his choice to cast Iago as a human, rather than a macaw. I felt that it made it less of a gimmick, and allowed Reggie de Leon’s interpretation of Iago shine through. 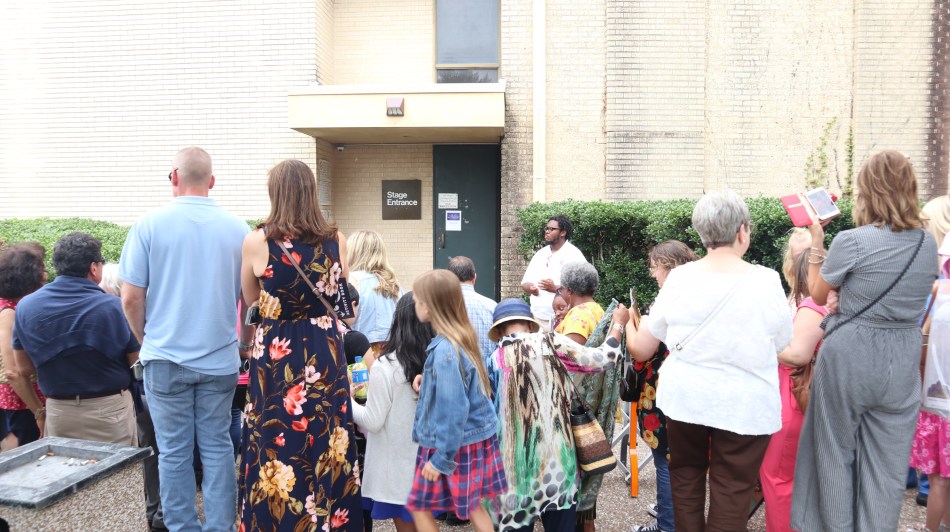 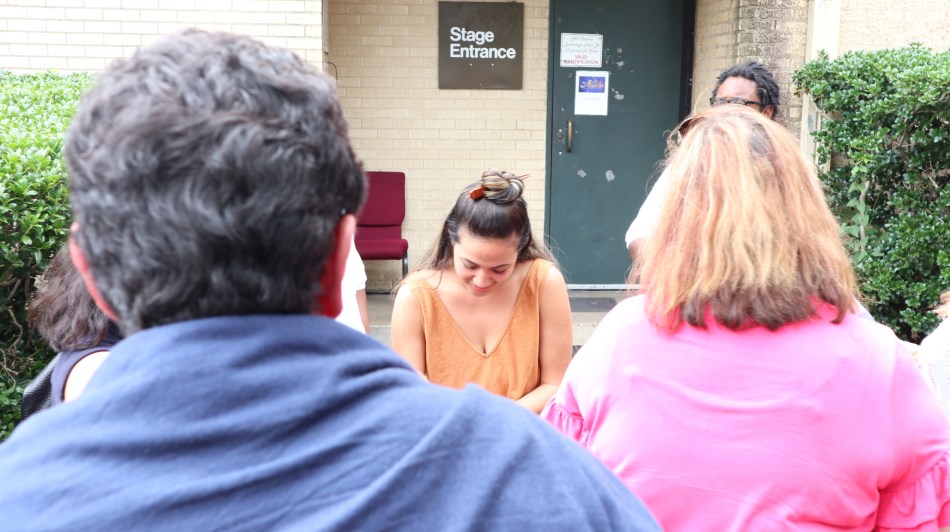 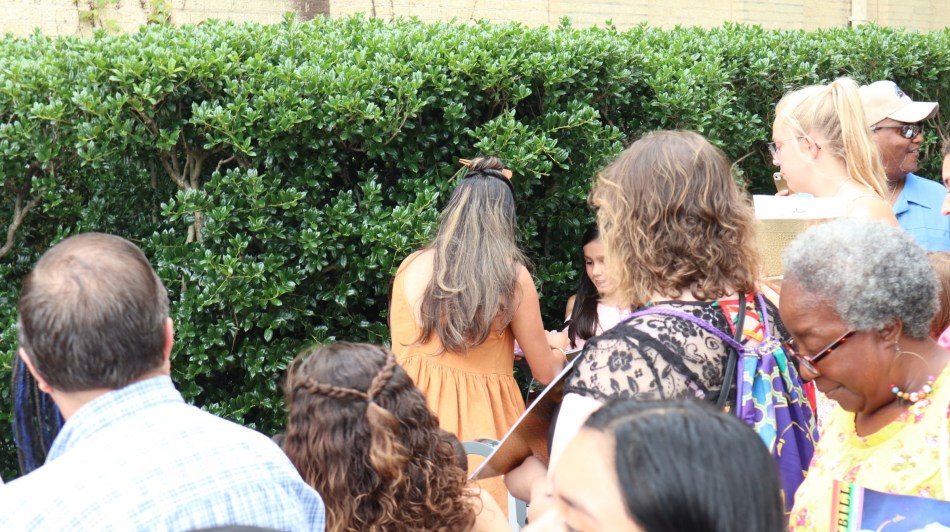 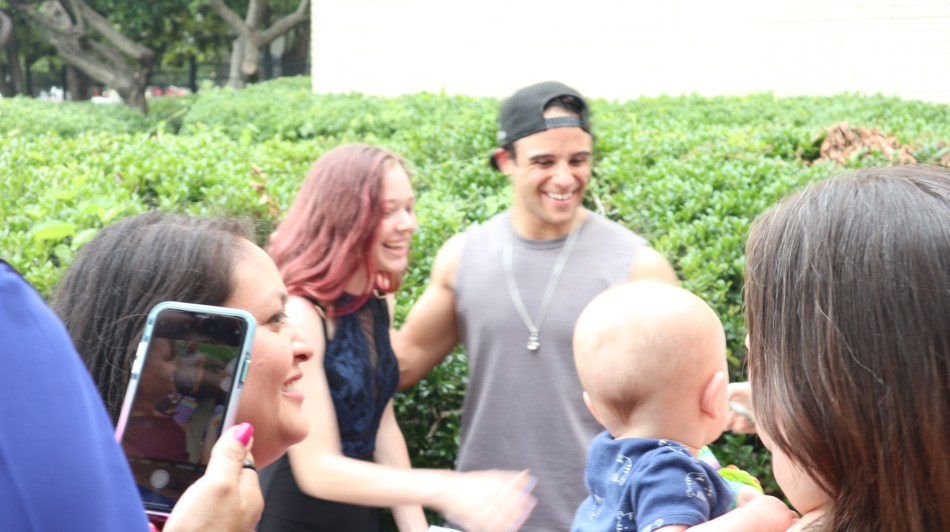 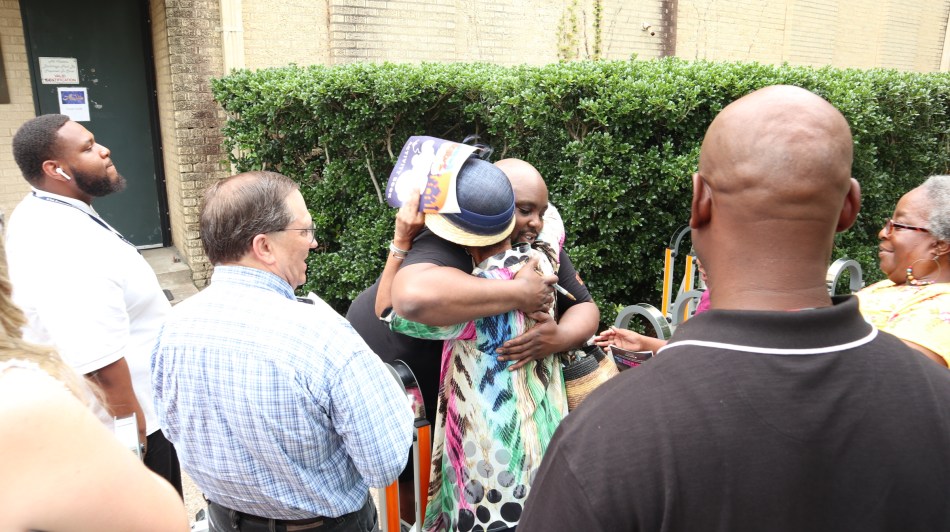 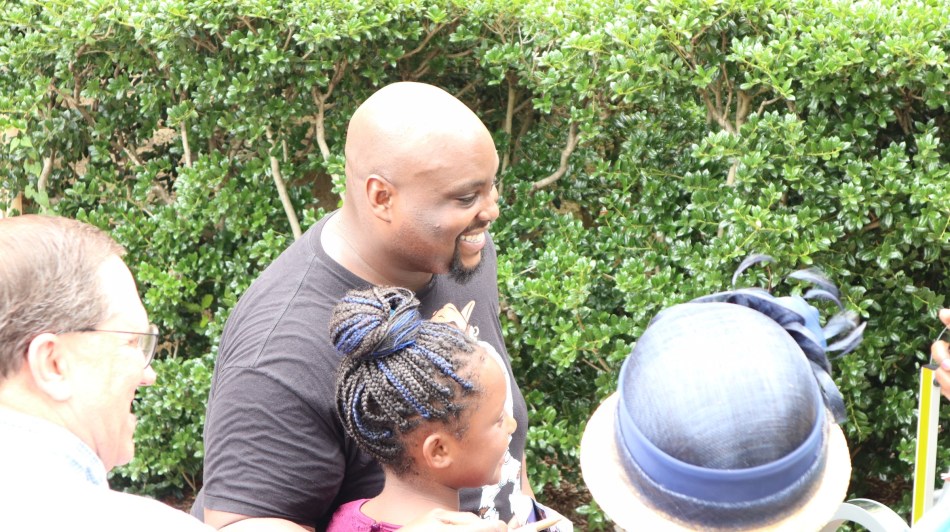 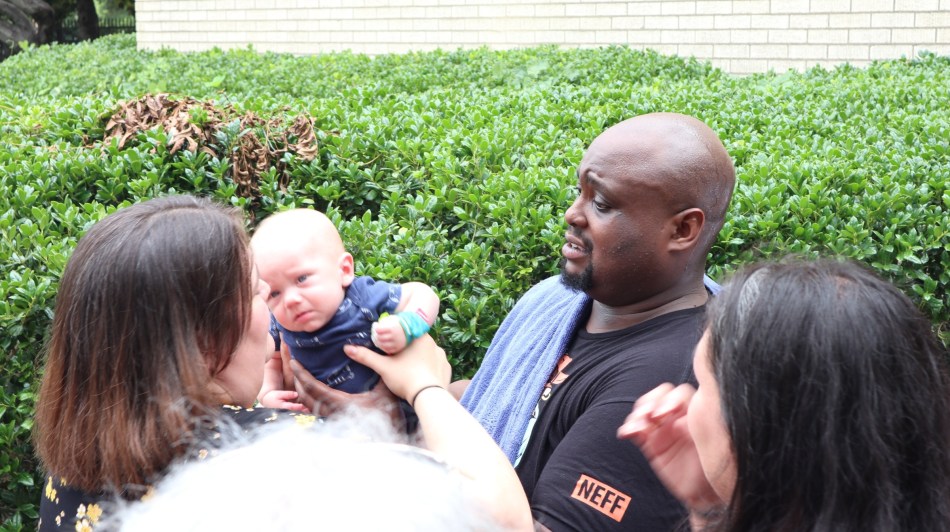 In the end, I would definitely recommend this play to anyone considering watching it! Unfortunately, it has already left Dallas and it is finishing up its run in Houston, but if you have the time and money, let Aladdin show you the world! Make a road trip, catch a flight, or join a caravan to the next stop on Aladdin’s North American tour, running through April of 2020. I’m no professional critic, but I would say that Aladdin, the Hit Broadway Musical, was shining, shimmering, splendid!

Just some notes on the overall experience ~ I loved it! I walked in, picked up my ticket, and took a photo with the Genie’s lamp. I was then shown my seat and enjoyed the play! I can tell that Dallas Summer Musicals has been continuously improving the experience for its patrons.

I noticed that there are large cushions for children to sit on, so they can see over the seat in front of them. DSM had staff members at the restroom during intermission directing people where to go, to expedite the process. Wow, I had never seen a more efficient process for getting women in and out of a restroom, but it all happened in less than a minute. Finally, the large banner for Aladdin was such a hot photo spot that people were queuing up to snap a pic! The banners I noticed in the past were much smaller, but this one really felt larger than life! 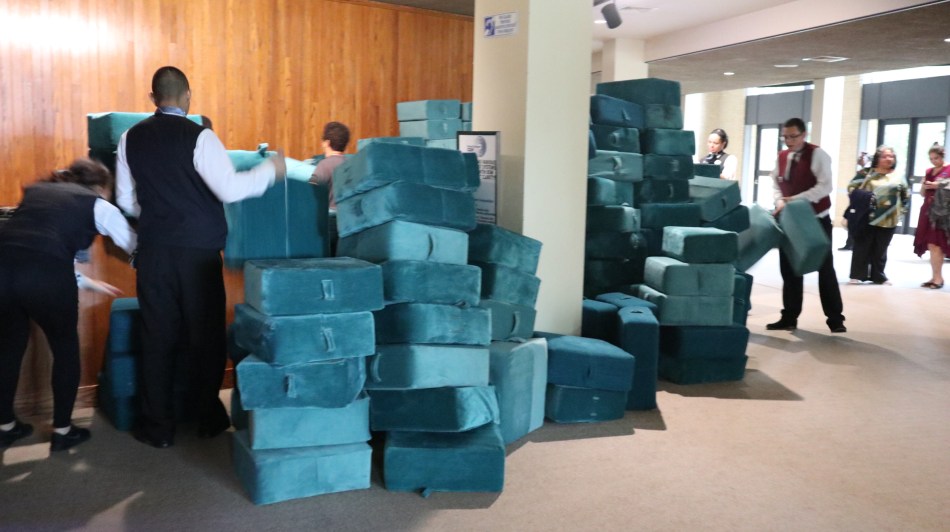 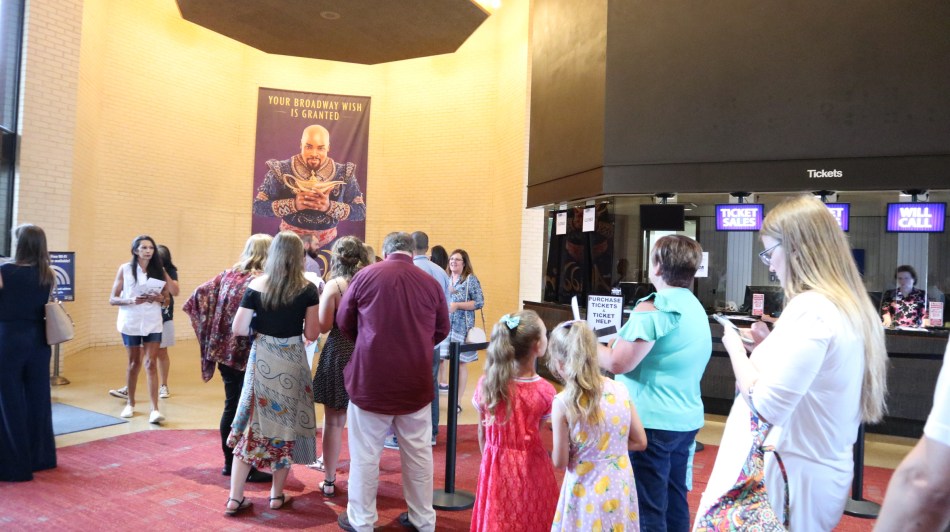 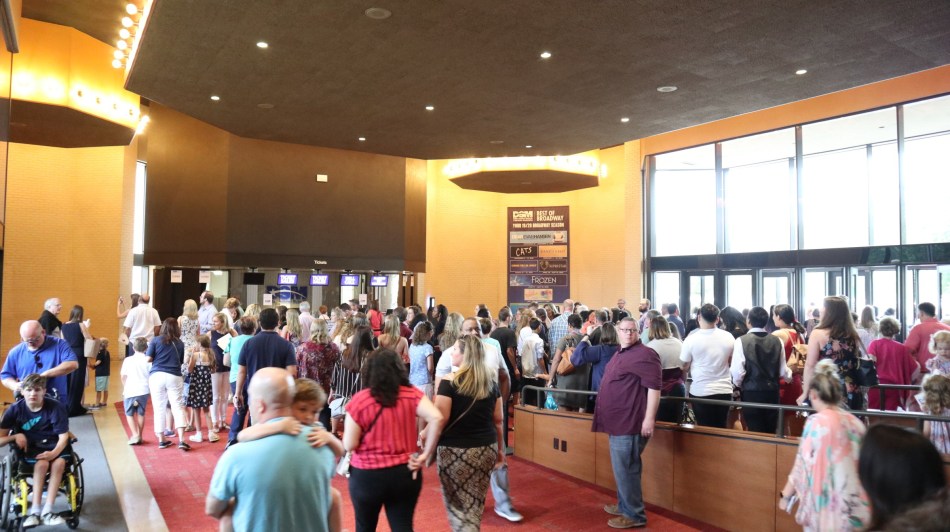 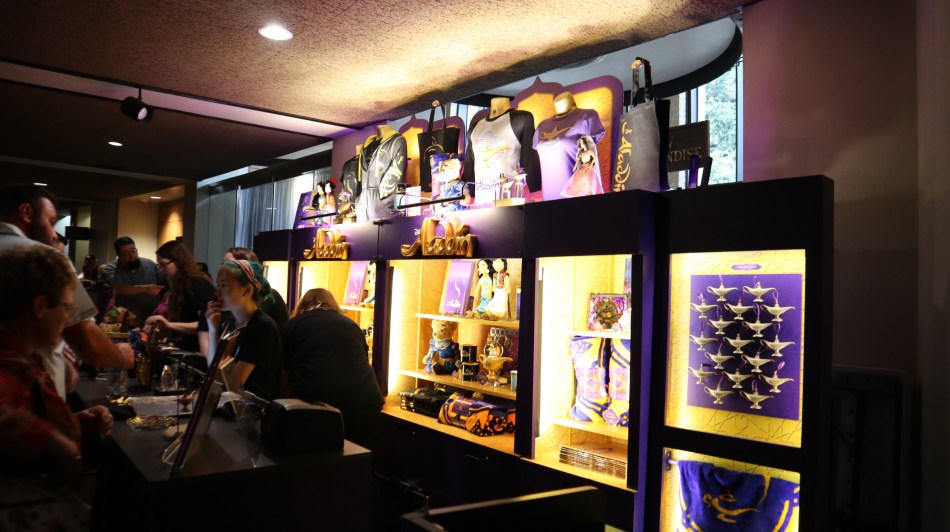 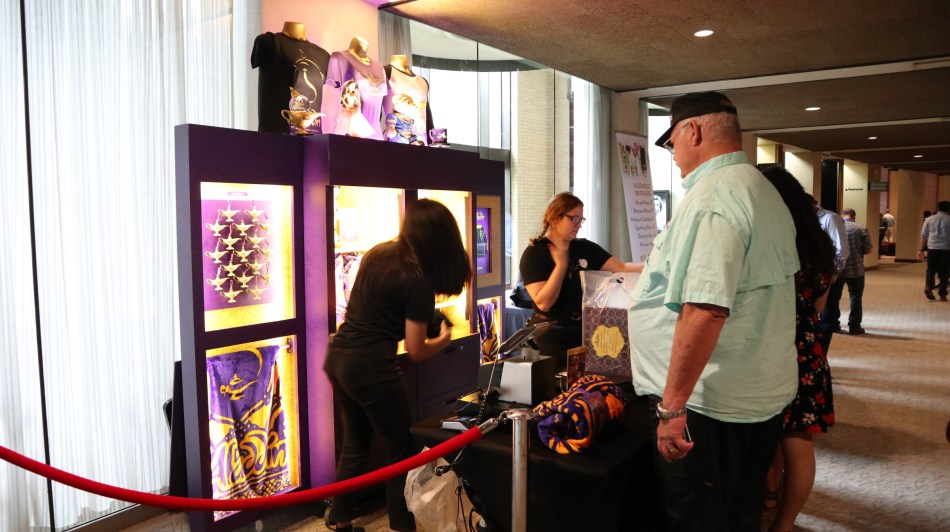 So much attention to detail, and it really paid off. I am so glad that I had the opportunity to watch such a wonderful musical, and I am always looking forward to the next one!

Back to School… After a Two-Year Break!

Back in Texas Update!