The Art of the Brick

Let’s get things straight – I want to be a child forever. I don’t ever want to grow up. Responsibility sucks and I want none of it. Simple things make me happy. One of those things are the stackable blocks that we call LEGOs!

Since we started dating back in 2012, Aaron and I have shared our fondness for building LEGO sets. We love all of the sets we have made together, from the small cities you can make with the LEGO Creator sets to the simplistic desk pieces from LEGO Architecture… and even the little $5 LEGO packets that we get to brighten each others’ day!

That being said, when I found out the Perot Museum’s summer exhibit was a LEGO exhibit, I told Aaron I really wanted to go together. I read a small tidbit about it (didn’t want too many spoilers) and saw that they had The Great Wave Off Kanagawa and it felt like it was meant to be, especially since we just got back from Japan and we saw that famous wave everywhere. However, he was home for only a week before I had to send him off to his next deployment and we didn’t have the time for it. Side note – we are definitely going to visit once Aaron gets home because the exhibit will be here until August 18th.

Soooo… when my friend Kelli hit me up and asked if I wanted to hang out since I was back in town, I said YES PLS LET’S GO TO THE LEGO EXHIBIT.

After we bought our tickets and walked into the museum, our tickets were scanned and we were handed some 1×1 bricks to add to a “community build” – a mural of a T-Rex attacking the Perot Museum.

After we we contributed to the community build, we went down the musical stairs to the Jan and Trevor Rees-Jones Exhibition Hall to see LEGOs in all their colourful glory.

We handed our tickets to the employee, she tore off the stubs, and handed them back. We walked through the sliding doors and we were enveloped by darkness…

“The Art of the Brick” was glowing against a black background. It was such a stark contrast from the brightly coloured entrance to the exhibit, probably a way to reset your mind and cleanse your visual palate before entering a world of creativity.

I got a lil artsy with some shots…

After stepping through the muted entrance, we were in an art gallery exhibiting some of the finest pieces from around the world, except they were all made of LEGO!

Some works of art were even brought to life with the pieces popping out at us! I was most excited to see The Great Wave Off Kanagawa, but I think I was so surprised by how many beautiful pieces there were. The Scream was really cool to see in this medium, as well.

The next room was a gallery of sculptures! I was surprised because I honestly expected this exhibit to be just the first room, then maybe a room of LEGOs for the kids to play with… but HOOO THIS WAS WAY MORE THAN I EXPECTED.

From a tiny vases and vessels to the massive Easter Island head, this gallery displayed works, big and small – from all around the world! Funny enough, Kelli’s entire family is in Italy without her, so we took pictures of her next to anything Italian. We had to throw mild amounts of shade at her family for leaving her here to watch the cats.

Next up: the build-up to Nathan Sawaya’s famous LEGO sculpture Yellow, which was featured in Lady Gaga’s music video for G.U.Y..

There were sculptures of faces and sculptures of faceless LEGO men, all meant to express something about the human condition – anguish spilling out of guts, hiding behind a mask, nightmares stemming from human fears, and so much more. 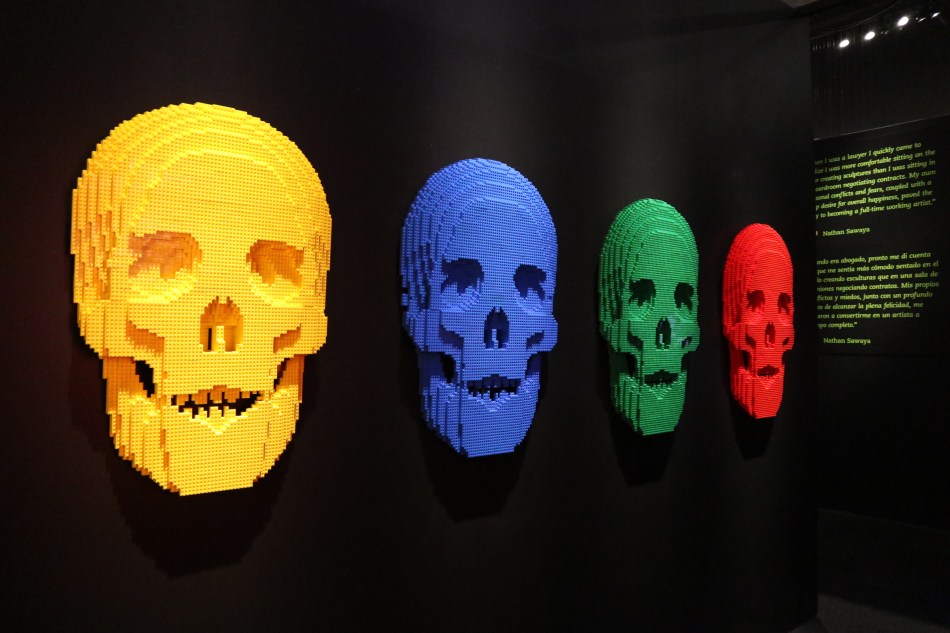 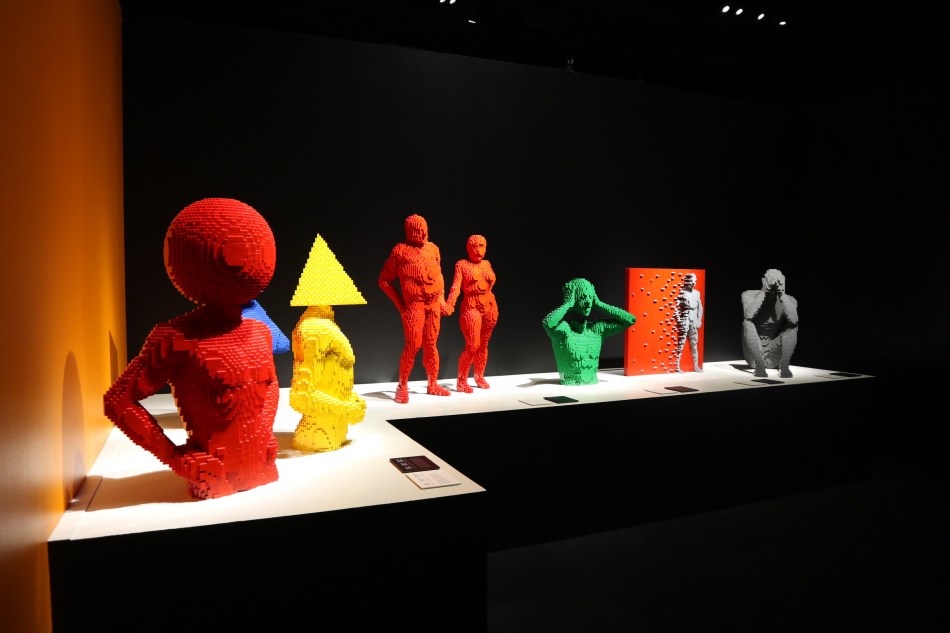 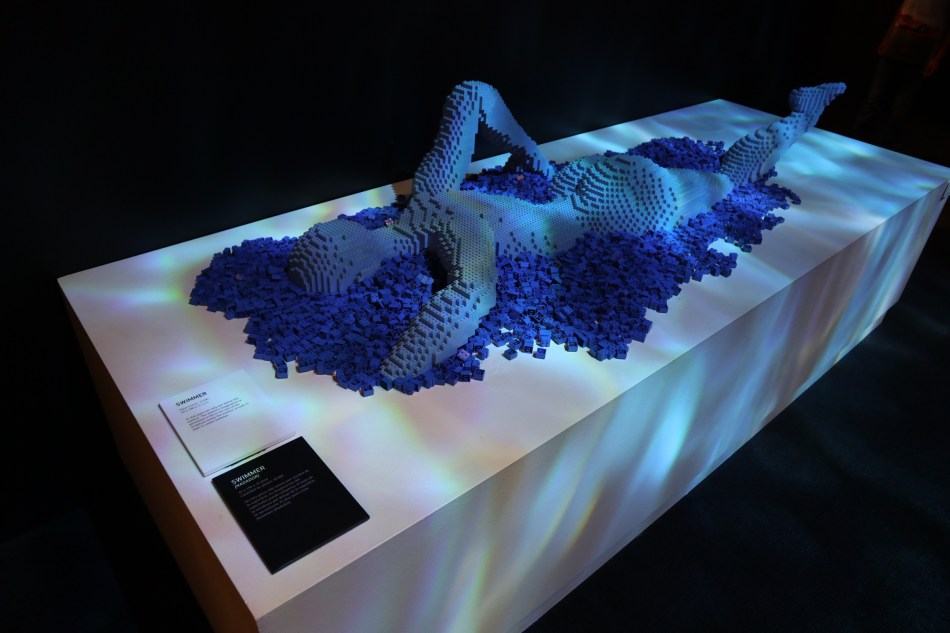 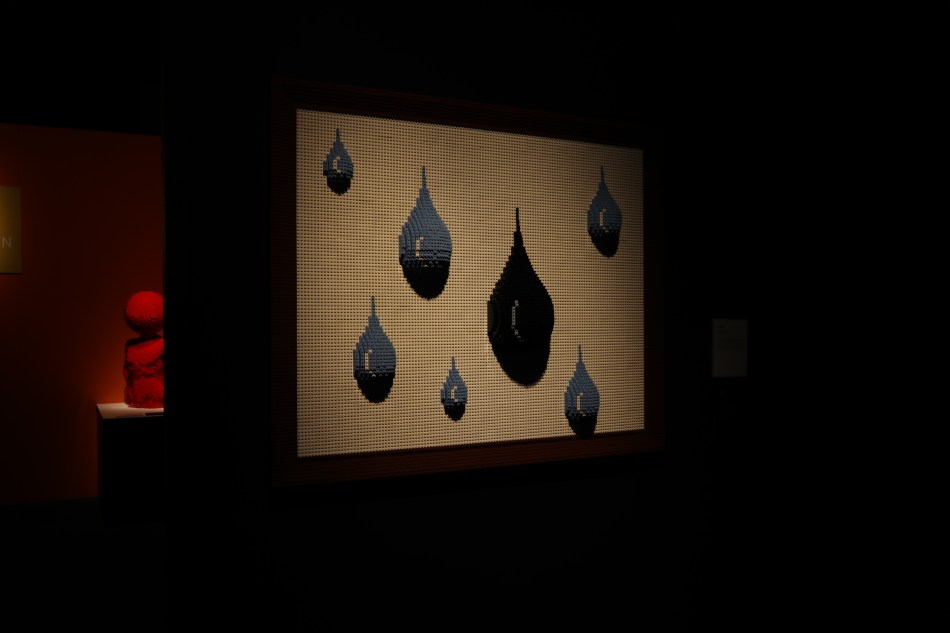 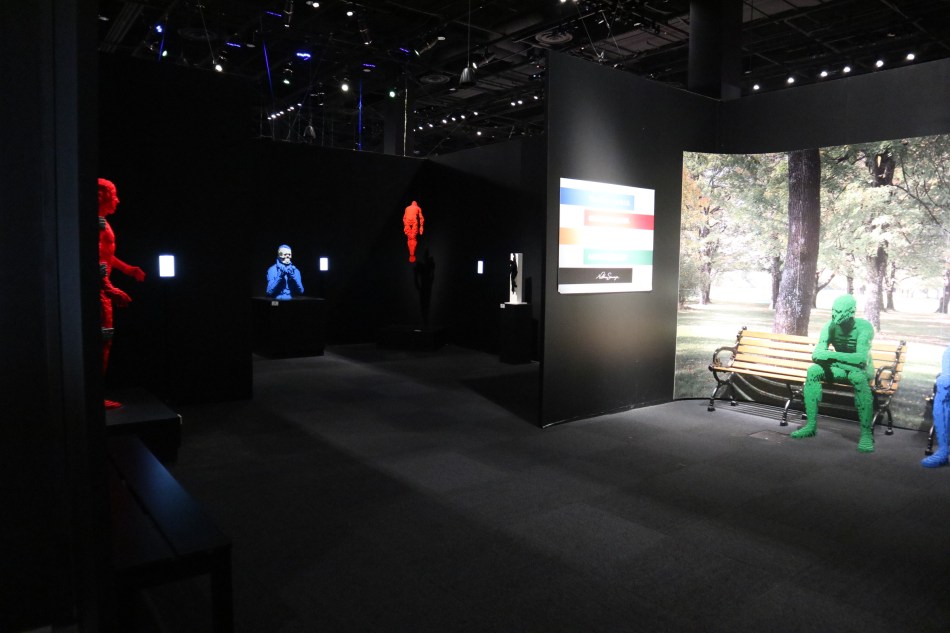 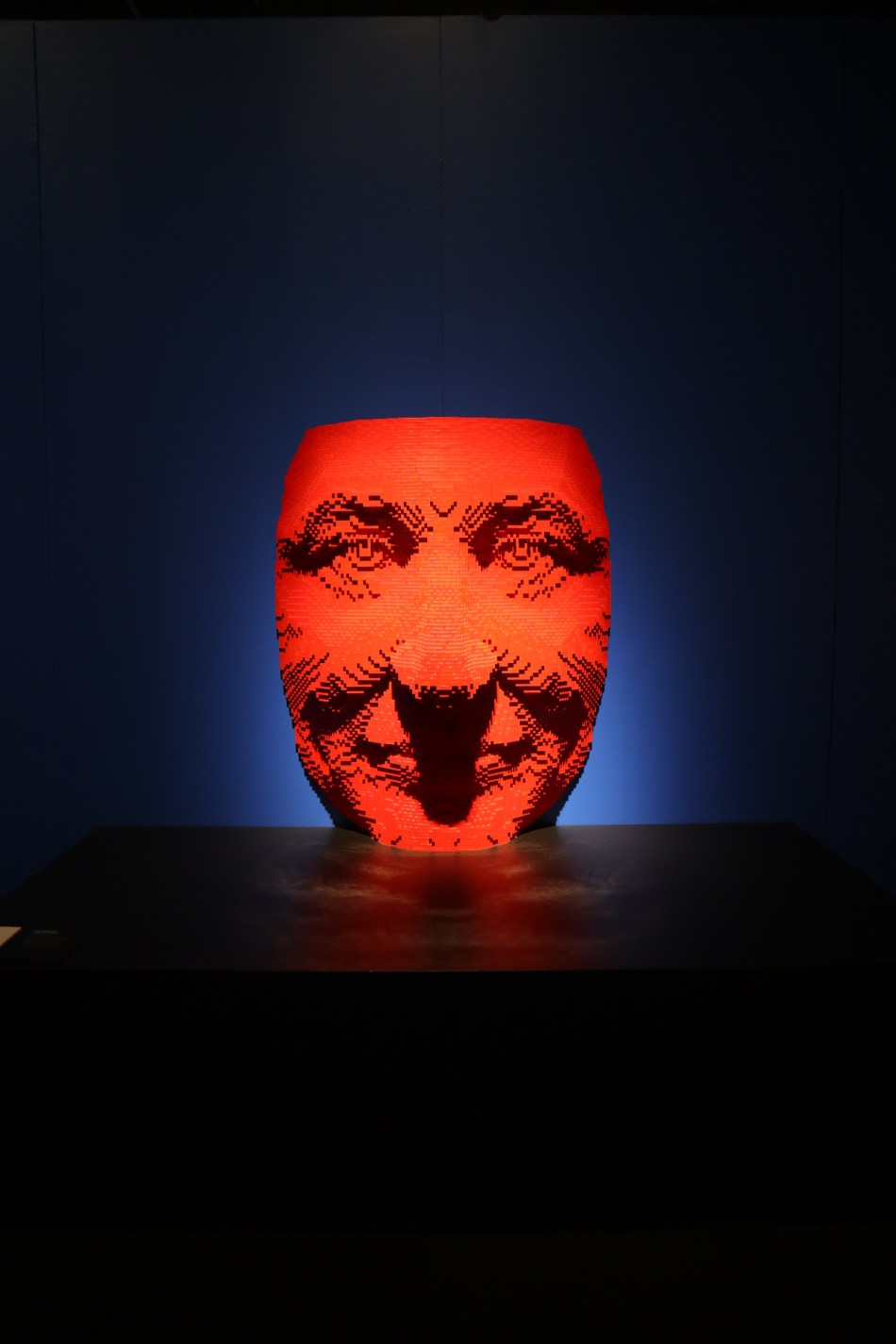 It was interesting watching kids marvel at the bright colours and various shapes of these sculptures while hearing the other adults discuss the darker meaning of these sculptures. From some conversations I overheard, it seemed some were experiencing a sort of catharsis seeing some of their own internal struggles and fears validated in the form of brightly-coloured bricks.

Next up was a more interactive art piece, where the gallery viewers could sit next to a sculpture for a picture!

Finally, at the end of The Human Condition exhibition was Nathan Sawaya’s famous Yellow.

FIND THE SCULPTURE IN THE PHOTO!

Wow, it just keeps on going, doesn’t it? Not to worry; this is the second-to-last gallery in the exhibition. This was such a fun gallery because you could see how excited children (and adults!) would get whenever they spotted the sculpture in the photo!

One of the members of the museum staff mentioned to us that the pieces shown in the exhibition were actually in the photos; not superimposed or photo-shopped in afterwards!

Those must be the world’s least comfortable flip flops…

Such a neat little gallery!

The last featured sculpture of this grand exhibition was a large T-Rex skeleton! This was exciting for me because Aaron and I had just visited the Dallas Zoo’s dinosaur exhibit “Dinos at the Zoo”!

YOUR TURN TO BUILD!

Finally, the last part of this exhibition – the interactive portion! This area had a ton of LEGOs that anyone could use for their own creations.

Kelli and I had fun making our names on the wall out of DUPLO blocks!

We had a ton of fun taking pictures with our names, too! The self-timer mode on my camera allows for multiple shots, so it kind of felt like a photo booth! 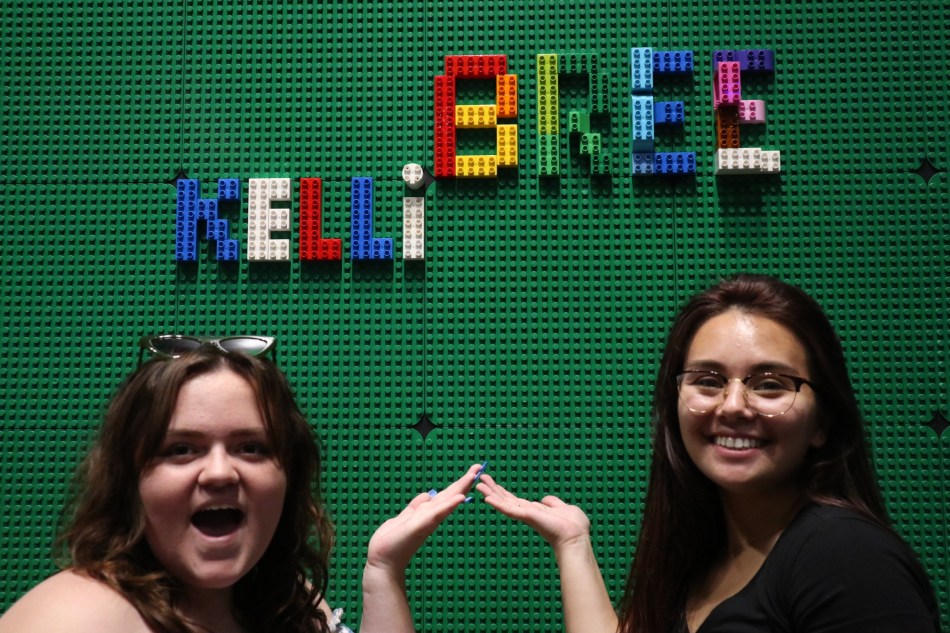 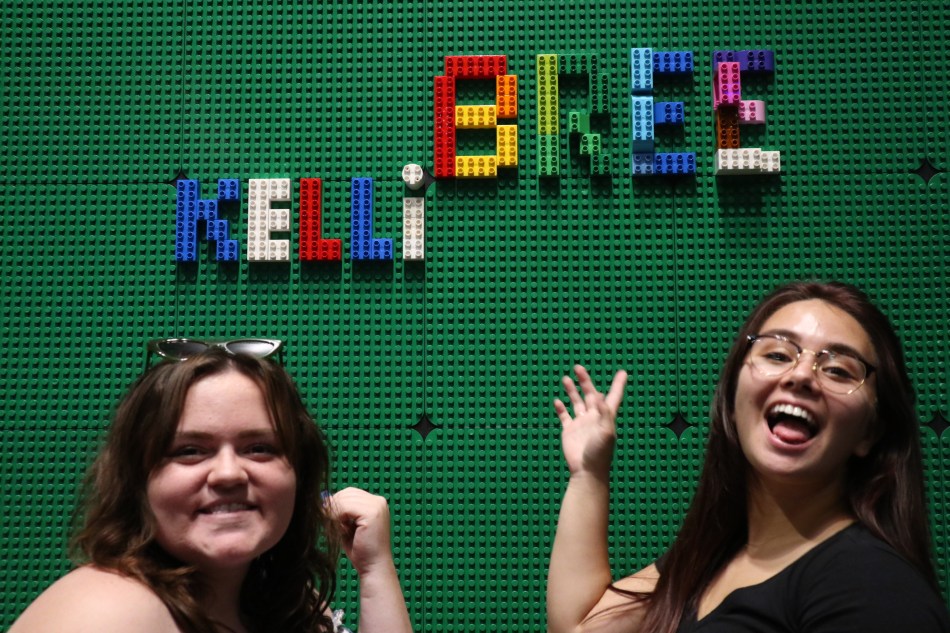 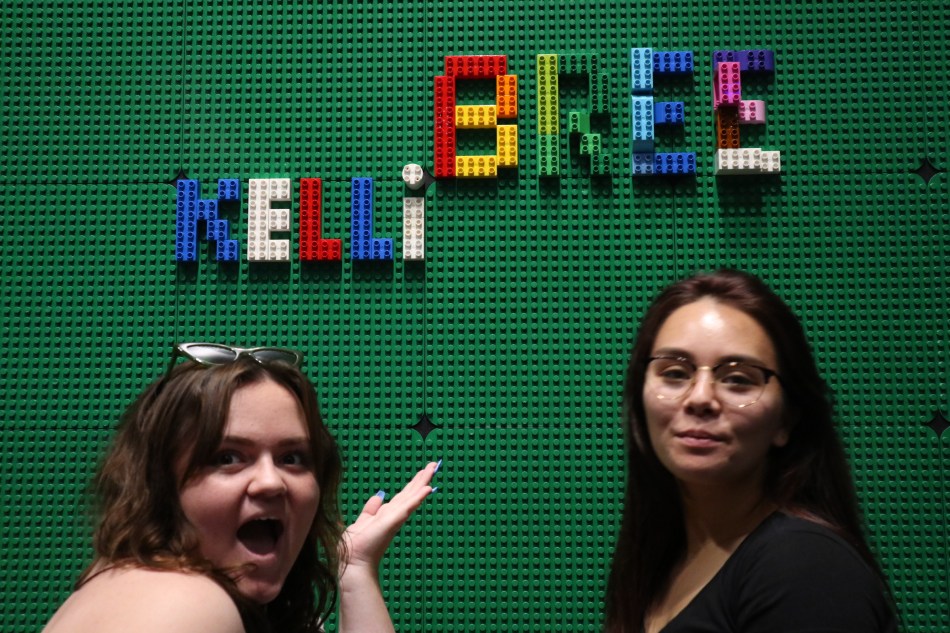 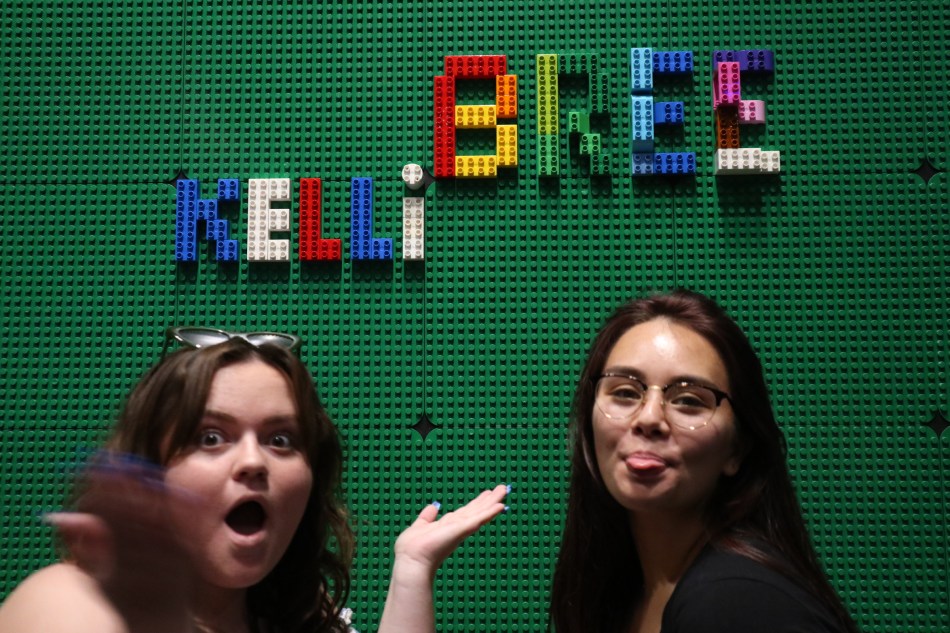 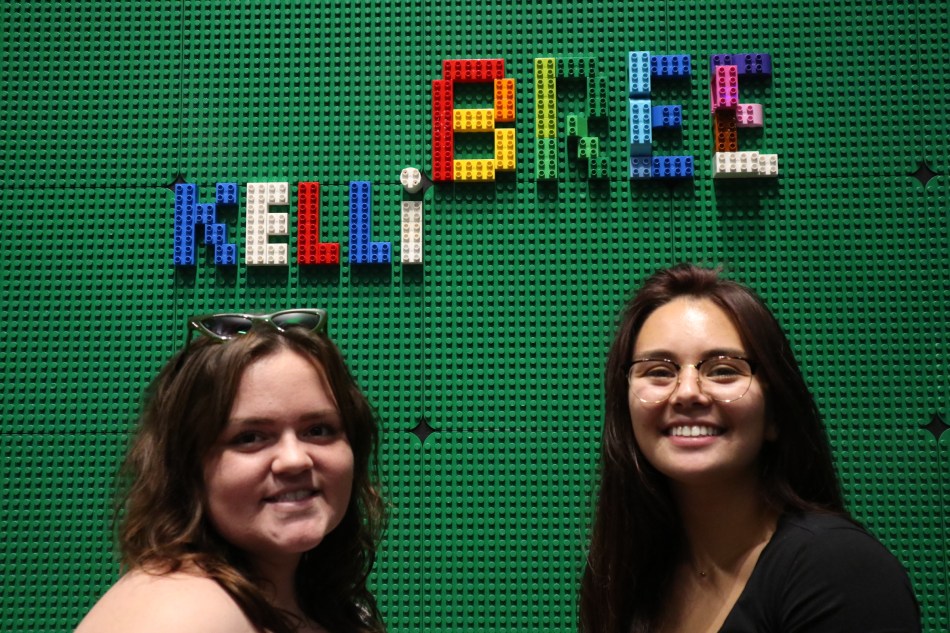 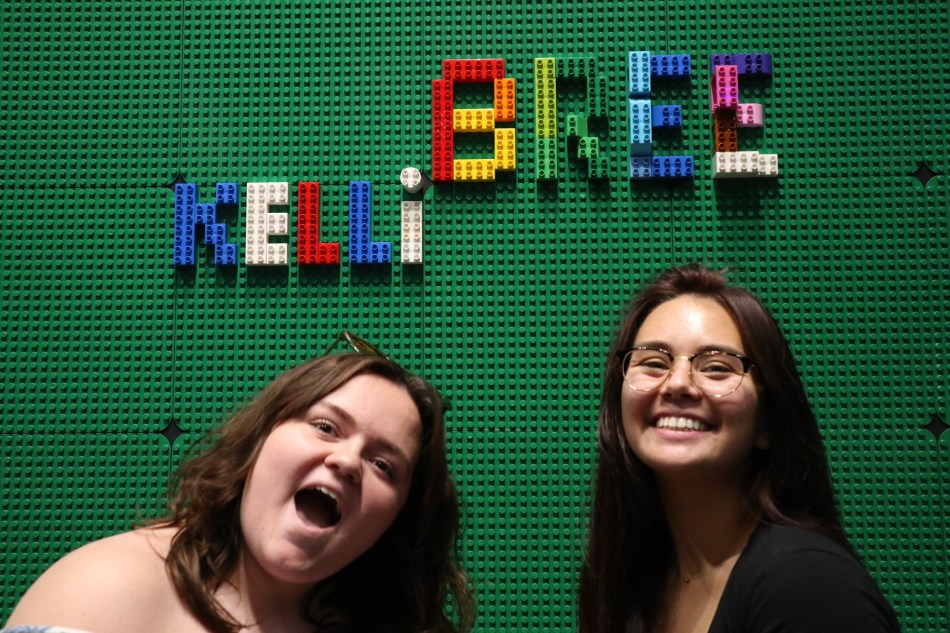 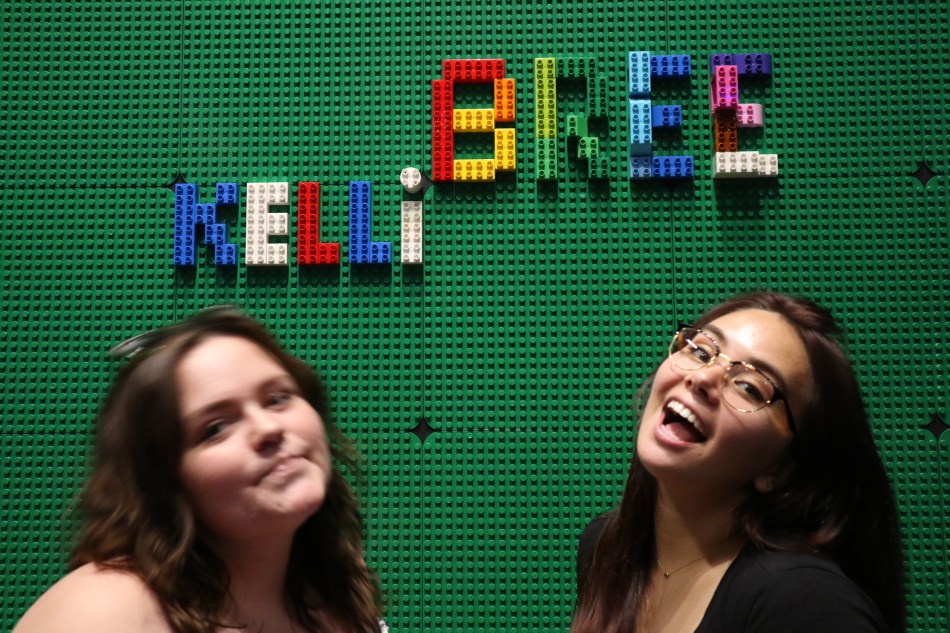 Aaaand that was it! After that, we headed up to the Perot Museum, checked out some of the different floors, then grabbed a bite to eat at Klyde Warren Park! It was such a nice day spent catching up and enjoying local tourism. I might make another post on the Perot Museum, but I will hold off on it for now, as I have a TON of Japan posts to catch up on!