♫ When you’re alone and life is making you lonely, you can always go… downtown! ♫

Warning: this is a fairly long post! This was meant to be a quick splash and dash about working downtown, but writing about it got me in a reflective mood, looking back on the past years and how I ended up where I am now. I actually wrote more, but I decided to break it up into multiple parts!

I’ll be writing about what I like to call “blue-collar IT” – or working in IT without a degree, along with my perspective of working in IT as a young woman. I’ll be uploading these fairly soon!

I’ve been yearning to live and work in a city for a while, now… but I never thought I’d get to do it before graduating college! Growing up in the suburbs, I appreciated the safety and convenience that came with a fairly sheltered lifestyle, but I always imagined downtown to have a completely different energy and feel to it.

WHEN I LAST LIVED IN THE CITY…

I used to live in the city… or rather, I lived in the outskirts of the city. I lived in far north Dallas back in 2015 when I moved into my first apartment, and the place I lived in was a stark contrast from my childhood home. The apartment complex itself wasn’t bad, albeit a bit old. An always-broken entry gate welcomed residents to their humble apartment homes that reeked of weed and dog urine, regardless of if the current tenants smoked or had pets themselves. The layout was cramped, the ceilings were low, and the neighbours were OK at best, but it was the first place I called home when my parents divorced and sold the house I grew up in.

I moved in with my then-boyfriend (now-husband), but he had just enlisted in the Air Force Reserve, so he was in and out of town for training assignments and deployments, so it was just me for the bulk of the year. At 20 years old and coming from a sheltered lifestyle in suburbia, I wasn’t quite ready to live in that neighbourhood. Admittedly, it was a rough neighbourhood. Drug deals happened on front porches at night, I had a creepy neighbour (he constantly crossed the line of what was appropriate and seemed to keep tabs of my schedule), and one time I had to skip classes because I heard someone unload six gunshots right outside my bedroom. (The police came and sorted it out though, so hakuna matata, right? … My GPA from that semester begs to differ.)

All of that said, I was a little intimidated by the city for a while. I aspired to make enough money to move back to the safety and comfort of the suburbs or out to the country, where I could be surrounded by nature, rather than people. BUT… enough time passed by and I ventured out into the city on many separate occasions, finding nice little neighbourhoods to explore around the town!

I got to experience the trendy area of uptown Dallas, I toured the Bishop Arts District with friends, and I found myself spending lots of my free time downtown and thoroughly enjoying it! Not to mention, Aaron and I spent a couple of special weekends downtown relaxing at the spa at the Joule and dining at Five Sixty (the restaurant at the top of Reunion Tower).

All of this familiarity made me feel much more comfortable with downtown Dallas, and it really made me excited to spend any free time in the city! Lucky for me, I ended up transferring to a job downtown…

This weekend marks my fourth weekend working downtown and I still can’t believe how fortunate I am to be in my current position. Just to explain how and why this transfer happened – prior to the start of the fall semester, my husband expressed concerns that I would be taking on too much between work, school, and fitness, so he urged me to quit my job. I discussed this with management and they were able to find an accommodation that allowed me to stay with the company!

The solution was moving me to the older sites downtown (I actually work at two sites) because they could accommodate a custom work schedule. I work ten hour days four days a week, or in other words – the middle of my week is cleared up so I can attend extra study sessions and workshops for my classes!

Three days of my work week, I’m at the old SoftLayer building that’s right across the American Airlines Center and next to the Dallas Mavericks Training Centre and Community Brewing. Apparently, it used to be a furniture warehouse, then it was converted into SoftLayer’s headquarters before our headquarters moved elsewhere. It’s pretty creepy outside at night.

The other day of my work week, I’m at the Dallas Infomart. If you ever take 35 or Harry Hines into Dallas, you’ve either seen this building or you’re blind. It’s the massive building with a very distinct architectural design, covered in mirrors, and turns out – it’s modelled after a freaking palace. 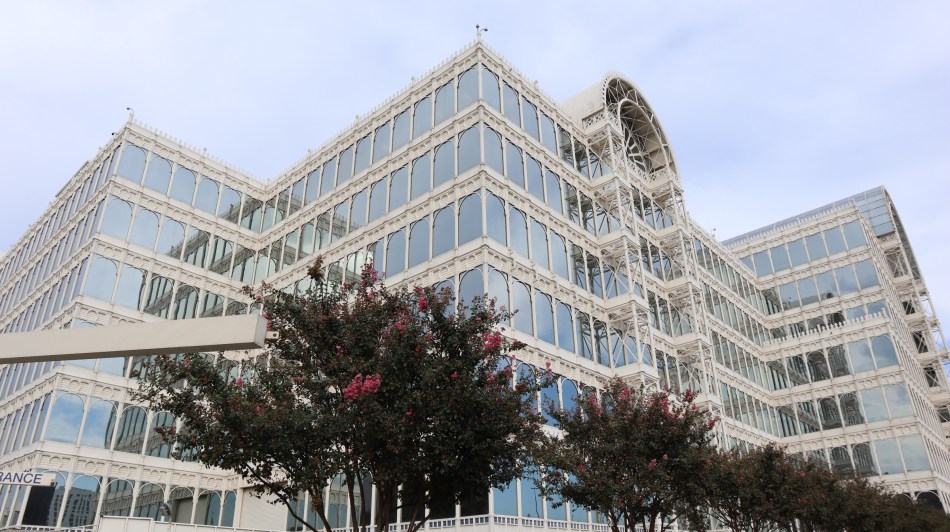 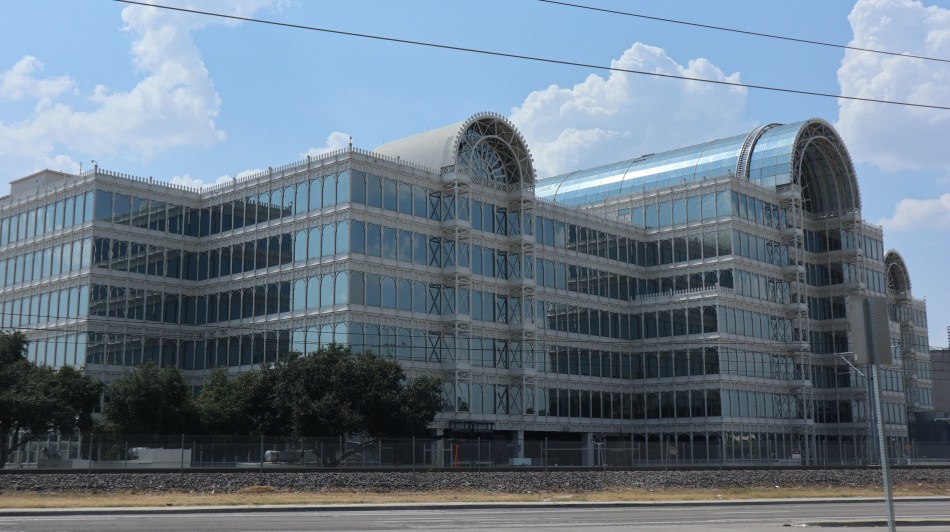 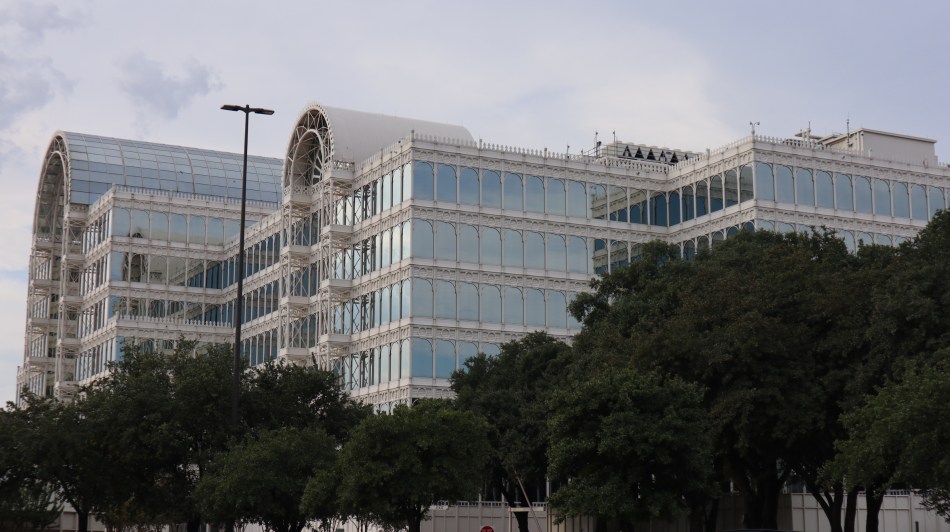 When I was in high school, I was in the Greater Dallas Youth Orchestra (the youth version of the Dallas Symphony Orchestra) and I looked out the windows of the Sammons Center for four years, staring at this building from the other side of the highway. I always assumed it was a museum or some sort of fancy housing for the elite of Dallas (makes sense now that I know it’s modelled after the Crystal Palace), but it’s actually the world’s first and only information processing marketing centre. It’s strangely poetic – in a way, I’ve come full circle. I used to stare out the windows at this building during orchestra rehearsal every Sunday, but now I’m sitting in a windowless room in that very building, for 10 hours a day, every Sunday.

Since I’m fairly new to working downtown, I’m still walking around wide-eyed and bushy-tailed whenever I get out and grab a meal in Victory Park or the design district.

Admittedly, I haven’t been keeping up with my fitness and nutrition the past couple of weeks while transitioning over to this new schedule (sorry Matt and Erica!!). I expected it would take a little time to find a good balance and a new routine that worked for me… but one result of this is that I’ve been eating out while at work, and I’ve been finding new spots downtown!

WHAT I’VE DONE DOWNTOWN SO FAR…

My first weekend, I went to a ramen restaurant in Victory Park called Jinya!

The second weekend, Aaron and I went to the BBNO$ concert at the House of Blues!

Last weekend, Aaron and I ate enchiladas and tacos at Mesero in Victory Park, then we popped into Sift + Pour for some macaroons. The only photo I have is of the cupcakes I ended up buying for my coworkers, though!

I’m enjoying exploring the sights and the scenes of the city, and I want to make it a point to go somewhere new every weekend! However, I am aware of the dangers of going out alone, as downtown isn’t the safest place for a petite young woman like me. As of writing this, I haven’t encountered any issues, and I try to have a coworker walk me out to my car after my shift, since I get out at an odd hour in the middle of the night.

I’ve already heard many stories from coworkers about gunshots sending bullets through the front windows of our building, meth-heads hiding out in the man-trap of our front door, and homeless people cutting through our fence to find warmth underneath the generators in the winter. There are plenty of homeless people who wander around the area, though they mostly keep to themselves. While driving to pick up dinner one night, I saw a guy casually whip it out and pee on a trash can, but that’s the worst I’ve seen so far. Most importantly whenever I go out, I have my wits about me, a knife in my pocket (though I know I’m out of luck if I ever have to use it), and I try to stick to the more affluent areas.

Overall, working downtown and transferring to these different sites has been such a marvellous change for me, and I can’t help but feel like I’m so lucky to have such a supportive team here at IBM. I’m actually able to manage my many priorities and I’m so motivated to keep it up because I’m working towards a better future for myself.

Isolation in the Workplace

Expectations of Working in IT